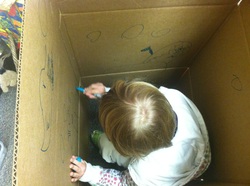 Avi is working on the inside of her box.
Topic Taught
The focusing lens of this unit was the idea of place and how people interact with those places. The unit would work with concepts involving expression, choice, function and form. The students were encouraged to plan consistently in their sketchbooks in order to gather concrete ideas that they could combine in order to create a piece of artwork. In class, students were asked to look at imagery and generate conclusions. To begin the unit, the students were asked to think of special places and consider why those places were special to them.

The first lesson was titled If I could be anywhere. In this lesson students would learn how shapes, colors, and texture can work together to make
up how a room looks. Students were asked to design their own room, classroom, living room, kitchen etc. to look however they wanted. They could make these spaces look realistic or imaginary depending on the kind of space they preferred to be in. The students were asked to make a list of at least ten special places to get them thinking of all the different kinds of special places. The students created two sketches to think about what they wanted their larger art piece to encompass. The students created special places using fabric, oil pastels, cut paper, and crayons.

The second lesson was titled Out of the box. For this lesson, the students were able to design their own house or structure using design elements
they were taught such as shape, color, and texture. The students were then able to apply what they had learned to decorate a cardboard box to make it look like what they would want their house to look like. The students worked in groups of six students in order to combine ideas and learn how to work in collaborative ideas.

Relevance of Topic
This unit focused on place was able to encompass several of the ideas and standards in art education. Students focused on expressing their ideas through imagery and creation. They were encouraged to talk about their special places in order to tell a story about people, places or things reflected in their artworks. In this unit, students used their own preferences to create imagery that was both personal and pertinent to themselves.

Students were encouraged to use 21st century skills such as planning and collaborating. They were able to discuss artworks and what kinds of things were important to look for in other artists' artworks.
Significance of the Topic
The idea of place is globally significant topic and has a very important role in the everyday lives of students. Students were asked to be thoughtful
about each decision they made in their special places. There should be a reason to include something in that special place. It is also important for students to understand that there are several different kinds of special places. Students were also able to understand how places can change. The students looked through the book Window by Jeannie Baker where a community changes over time.

Looking at this unit more personally, I believe that it is very important to give students choice while having structure. The unit of place allowed us to
give the students a direction to go but it did not limit them. I think that the collaboration portion of this unit helped me assist groups that were having
trouble making concrete decisions. This unit helped me form thoughtful questions to ask students about the choices they had made.

For these young students, the projects they worked on could have as little or as much information as they saw fit. Students were able to add things that were both personal and pertinent to their own lives. They were able to combine both real and imaginary ideas into visuals that included texture, shape, and color. Each special place was important to the student and they were able to incorporate something about themselves into the artwork.